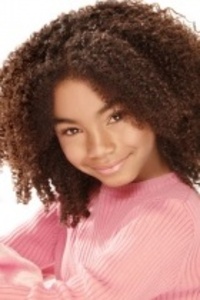 Christina is a bright and energetic eight year old who loves to entertain. She has been modeling since she was nine months old. At an early age she expressed an interest in perfoming in film, television and theater.In July 2004 she formally began her acting training. Her instructors as well as industry professionals have commended her for her reading and memorization skills, her enthusiasm and confidence. She enjoys her craft and she looks forward to future acting courses that will continue to prepare her for more opportunies in the entertainment industry.